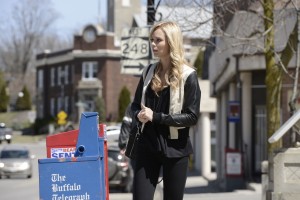 The idea of a truce with the Mutts is something foreign to the Pack, especially after Peter’s death and the threat against Jeremy’s Alpha status by Samuel Boggs. Prior to those two events, they might have been willing to consider some type of arrangement for the betterment of everyone, but once they realized that the Mutts thought they were weak and would continue picking at them until they hit back, there was no turning back. The Pack will have to make a swift, decisive statement against the Mutts as a whole, although it’d be directed mostly at Kane and Santos, if they have any hope of keeping order in a world always teetering on the edge of chaos.

On the next episode of Bitten, the Pack ends up agreeing to a sit down with Santos, possibly as a last ditch non-violent effort to either extract information about the Stillwells. They know that Santos has a connection to the death of a former Pack member, but before the Pack can arrive at the meeting to see about what he knows, whether he’s willing to give up any information, and if a truce is feasible at this point, they get ambushed by the Mutts on the highway. The rumors of the Pack being vulnerable and of Jeremy not being the strongest Alpha have ingratiated themselves into the world of the Mutts to the point that making a power play seems like the best move; it’s risky, considering how ruthless the Pack could be if they emerge victorious, but after years of being subjected to the Pack’s rule, the Mutts are willing to take that risk on the chance of finding their freedom and being able to live how they want.

Do you think a truce between the Pack and the Mutts is possible? Who else aside from Santos was involved in the death of Stillwell? Considering the mess going on around her, should Elena have returned to Stonehaven after all?