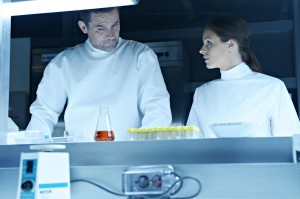 For as long as the vectors were quarantined in Level R, the CDC had the opportunity to focus on creating a cure that would spare the lives of the ill and keep the base from imploding. However, Alan and Sarah effectively ran out of time when he decided to retrieve Julia, opening the door to Level R and allowing several vectors to bust loose and run free throughout the facility. The group who were thought to be infected were isolated for several days in the level and as such, were waiting for the opportunity to exact revenge upon those who forced them into exile, especially since not everyone who was put into Level R in the first place was infected. Now, though, the virus has spread and evolved just in time for the vectors to make it to Level B.

On tonight’s episode of Helix, the vectors arrive back on Level B after days away and instead of merely trying to attack/maim/kill anyone in their path, they lead the base’s security team into the food storage room as a way of starving out all those who remain looking for the cure. While it’s a remarkably intelligent move considering the shape that the vectors are in and the primal state of their minds, less clear are the motives for retrieving Peter’s body from the lab. Could it be that the vectors somehow know that he was one of the first infected and hold him up as something of a hero? Or are the current vectors planning on using his body as a bargaining chip to extract information or goods from the base authorities?

Elsewhere on Helix, Sutton holds Walker prisoner in the base, while Sarah learns about the side effects of Walker’s treatment.

Why do you think the vectors took Peter’s body when they came to Level B? Is Sutton using Walker as a pawn to expedite the creation of a cure? Even though all of her other symptoms have vanished, what’s with the permanent silver eyes that Julia has now?