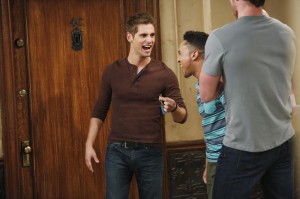 Although a part of her still has feelings for Ben, and always will carry something for him, Riley has been looking toward moving on following their breakup. If she had someone else in her life, she would be able to move on from what happened and not allow the dissolution of her relationship with Ben to eat away at her. This was something that she wanted to happen for years and now that it’s over, she has to move forward or risk becoming stuck, always counting on things with Ben to eventually resume rather than living her life the way that she should. But how would meeting somebody impact her friendships with the guys? Could she and Ben remain friends if one of them gets into a serious relationship?

Wednesday, February 26th – “Romancing the Phone”
Ben finds the cell phone of a cute girl, Sydney (Aimee Carrero), but when he’s unintentionally late for their first meeting, he convinces Tucker to go in his place and take the blame. But when Sydney takes a liking to the real Tucker and asks him out, Ben is determined to prove she’s interested in the wrong guy. Riley meets up with an old frenemy, Heather (Cassie Scerbo), and enlists Danny in her plan to prove to Heather once and for all that she’s a winner. Meanwhile, Bonnie asks for Tucker’s help in coming up with a catchy new slogan for her realty business, but things quickly go awry when she starts getting offers from guys interested in buying more than a home.

Wednesday, March 5th – “The Bet”
Riley bets Ben that he can’t get a second date with Heather. He gladly accepts the challenge, but when Heather doesn’t jump at the chance to go out with him again, Ben resorts to desperate measures. Bonnie decides to break up with Brad, but when her realtor boyfriend declares his love, she can’t bring herself to go through with it and asks Danny to end the relationship instead. Further complicating things as only Bonnie can, her love life takes another twist when she unknowingly falls for Brad’s father (Bruce Thomas). Meanwhile, Tucker uses Emma to pick up women.

Wednesday, March 12th – “A Knight to Remember”
Tucker still hasn’t told his dad that he’s not a lawyer, which proves to be a problem when Marshall Dobbs (Philip Morris) unexpectedly arrives for a visit. Tucker and Ben devise a plan to keep the charade going, but it eventually backfires when Marshall learns the truth. Riley falls for a handsome Brit (Christopher O’Shea) she meets at the bar and tells Bonnie that she finally found “the one”; however, Bonnie mistakenly believes that Riley is talking about Danny and immediately encourages him to go after his true love. Meanwhile, the group’s trip to the renaissance faire hits a snag when a sword fight breaks out in the subway.