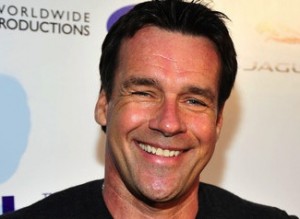 Elliot will be playing the role of Mike, a manly-man type of widower who marries Kaczmareck’s character and moves into her place along with his three children.  Thus, upsetting the comfortable – ahem – cushy life of her thirty something son, who still lives at home.

The multi-cam comedy will be executive-produced by Johnny Galecki (The Big Bang Theory), Ricky Blitt (Family Guy) and Stephen McPherson.