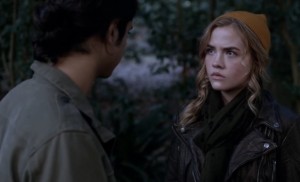 For years, Danny walked around with the knowledge that he was being punished for a crime he didn’t commit. That would be an awful lot to ask of an adult, let alone someone who hadn’t yet reached his teenage years, especially when there was no way he could have come clean. And in a stroke of dramatic irony, Danny is now something of a killer as he inadvertently knocked Vik off a cliff, albeit in self defense, and to his death below. Still, years of being treated as an “other” for what he was accused of doing have taken a toll on his psyche and on the next episode of Twisted, he begins wondering whether everyone who made him feel less than was right and whether he even deserves the second chance at life that he so desperately craves.

Due to Danny saving her on the cliff, Jo wants to return the favor by getting him out of Green Grove as quickly as possible. He knows that no one is going to believe their story about what actually happened, not when the police are already after him for another murder, and that the only chance he has of starting his life over would be to leave the town. Even if he went and turned himself into Kyle the second after Vik fell, there would be no way anyone in town would believe him, since they know Jo has a reason to protect him and Regina’s murder still hasn’t been solved. Should Danny choose to hide out until the true killer of Regina has been found, or at least until Marilyn’s credibility has been destroyed by Kyle, there’s a chance that he could one day be able to walk through the streets of Green Grove without garnering the type of gawking that he’s had to deal with thus far. Until then, though, he’ll need to lay low and hope that the justice system can give him the break that he’s due.

Elsewhere on Twisted, Lacey becomes convinced of a link between Gloria and Vikram, while Karen questions the wisdom of allowing Jack back into her life and Mayor Rollins becomes the latest name connected to Regina’s murder.

Do you think Danny deserves a second chance? Why is Charlie so interested in Lacey? Could Mayor Rollins have something to do with Regina’s murder?