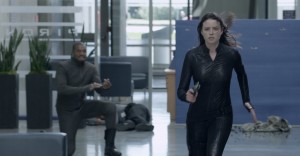 Syfy has announced premiere dates for the next seasons of Continuum and Warehouse 13, as well as when to expect the series premieres of Metal Hurlant Chronicles and Jim Henson’s Creature Shop Challenge and various specials that will air during the spring.

The third season of Continuum will premiere Friday, April 4th at 10:00 with the show picking up after Alec sabotaged Kira’s chances of going home, a decision that not only greatly impacted the future, it landed Kira in the custody of the Freelancers. Even if Kira is able to make it out of the clutches of the Freelancers, will her friendship with Alec ever be the same, especially when she finds out the effect that his decision had on her present? The final season of Warehouse 13 is set to premiere Monday, April 14th at 9:00, six episodes that will center around Claudia’s battle with Parcelsus and the various personal and professional revelations made by the team; joining the show on Mondays will be Metal Hurlant Chronicles, which will air episodes at 10:00 and 10:30 for six weeks. The series, based on the popular comic anthology Metal Hurlant, takes place on a different planet and features a different cast each episode.

Syfy will also be airing several specials during the spring months, beginning with Carvers on Tuesday, March 4th at 10:00. The special follows Ray Villafane and Andy Bergholtz, craftsmen who carve wood, ice, pumpkins, chocolate, sand, and meat into anything their clients desire. Tuesday, March 11th will see the premiere of My Big Fat Geek Wedding, a one-hour special that presents the wedding of Julian Roman and Mandie Bettencourt, who met while playing Final Fantasy online. The two will plan and execute a Renaissance-style wedding with the help of wedding planner Kristin Banta and party planner Brandon Hilock. Face Off alum Eric Fox will get his own one-hour special on Tuesday, March 18th, as Foxy & Co. follows him as he opens his own creature effects shop. The following Tuesday, new reality-competition series Jim Henson’s Creature Shop Challenge will premiere at 10:00. Hosted by Gigi Edgley, the series pits 10 aspiring creature designers against one another with the grand prize being a job working in Jim Henson’s Creature Shop.

The lone original movie that Syfy is set to premiere this spring is Zodiac: Signs of the Apocalypse. To bow in April, the film follows the arrival of an ancient artifact at a university and the impact it has not only on the collection’s curator, but on humanity as a whole. Zodiac: Signs of the Apocalypse stars Joel Gretsch (V), Aaron Douglas (Battlestar Galactica), Andrea Brooks (50/50), and Christopher Lloyd (Back to the Future).