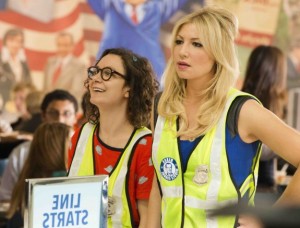 CBS has announced premiere dates for midseason comedy Bad Teacher and crime drama Unforgettable. The former, an adaptation of the Cameron Diaz movie of the same name that stars Ari Gaynor in the title role, will premiere Thursday, April 24th at 9:30, while Unforgettable is set to assume the Fridays at 8:00 slot beginning April 4th.

The Bad Teacher move will be preceded by The Crazy Ones and Two and a Half Men flipping time slots, with the former concluding its first season on April 17th. The time slot change will occur on February 27th. Meanwhile, Undercover Boss, which has been performing well for CBS, will conclude its 15-episode season on Friday, March 27th, making way for the recently resurrected drama starring Poppy Montgomery. It’s the first time CBS has had a drama in this particular hour since A Gifted Man in 2011.

Not receiving a premiere date was legal drama Reckless, which has effectively been pushed to summer. Bad Teacher is in an interesting position in that it only has three weeks to make a positive ratings impression on CBS executives before the network has its upfronts presentations in May. Airing behind Two and a Half Men could give it the boost necessary to earn an early second season renewal, but since CBS held it for so long anyway, they might see what it can do in the summer before making a final decision. Meanwhile, The Crazy Ones got the move that it should have earlier in the season, as the Robin Williams comedy has been struggling to hold up the 9:00 hour while being the only single camera comedy in the lineup and airing after The Millers, one of the most tonally incompatible comedies it could have been paired with. Whether the move will allow it to feed off of Men‘s audience, though, remains to be seen.

Which of the CBS Thursday comedies do you think will return next season? Should CBS have made the move to flip Two and a Half Men and The Crazy Ones earlier in the season? Will you be watching Bad Teacher?