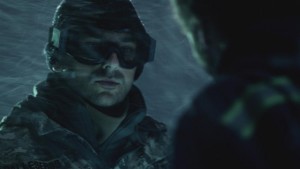 Although those at Arctic Biosystems should be thrilled that the cavalry has been called and that they might be getting out of the base sooner rather than later, there are two questions lingering about the arrival of Ilaria COO Constance Sutton – 1) who was the one who reached out for help and 2) is Constance actually going to be help or will she be the next big obstacle between them and freedom. There’s no use in getting their hopes up for a rescue or extra time in formulating a cure for the virus if she’s been called there for nefarious means or if she has something else on her mind aside from saving the CDC team and all those infected that she can.

On the next episode of Helix, Alan meets with Constance, who seems to be in his corner regarding the threat of the current situation and the need to evacuate Julia from Level R. However, since her helicopter is two days away from returning to the base, she doesn’t have the resources necessary to fix the communication system, meaning that the CDC team is now trapped with a stranger who has a vested interest in the base and what happens within its walls. She might not want word of the virus to leak out into the public sphere and could be willing to do anything she has to in order to silence Alan and Sarah from speaking out about the ordeals they’ve had in the Arctic. Will those in the base who pose a threat to Ilaria’s bottomline be able to survive the two days that Constance and company will be roaming the halls?

Why do you think those from the Ilaria Corporation are at the base to begin with? Is the base safer with Constance there than they were when she was away? What type of discovery do you think Daniel will make?