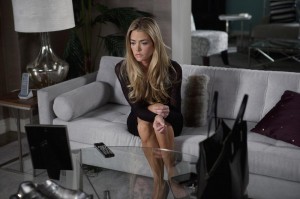 For quite a while, Jo was the only person in Danny’s corner, as she allowed the friendship that they once had to override the feelings of paranoia that pulsated through Green Grove upon his release from juvenile hall. However, after standing with him through the storm of public opinion and even getting Lacey to begrudgingly join their crusade to prove his innocence, Jo finally had enough of Danny withholding information and the affair that was going on under her nose and tried to distance herself from her two friends. But have her feelings for Danny turned so sharply that she would be willing to give him up to the police?

On tonight’s episode of Twisted, Danny stops into Jo’s while on the run from the police, looking for either direction on what he should do now or refuge until he could come up with a plan. However, Jo wants nothing to do with him and nearly gives him up to Tess in order to drive him out of her room and back onto the streets of Green Grove. While it’s understandable that Jo’s feelings are hurt after what happened and that she’s emotionally burnt out after being one of the only people to defend Danny for months, it’s still a decidedly cold move to completely shut Danny out and try and act as if the case doesn’t even exist anymore. It does exist and it’s stationed primarily in her home due to her father leading the charge, so even though Jo may want to forget that the last few months ever happened, she’ll be jammed right in the middle of the Green Grove hurricane until justice can be served.

Elsewhere on Twisted, Danny reveals the details of what happened with Tara to Jo and Lacey, while Karen calls on an old friend to help find Vik and a new Green Grove resident ingratiates himself into Lacey’s life.

Is Jo right in trying to distance herself from Danny, Lacey, and the murder case? Why do you think Danny has held on to the details of Tara’s murder for so long? What does the new Green Grove resident have to gain from getting close with Lacey?