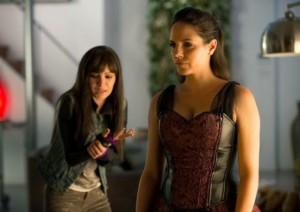 Though Bo might not have been aware of where she was and how much time had passed while she was on the alternate plane of existence, the fact remains that she missed quite a bit while trapped on the train seemingly bound for nowhere. Although much of what she wasn’t around for revolved specifically around her, namely how to find her and return her safely from wherever she had went, there were still moments and situations that didn’t have anything to do with her directly that she has to catch up on when she returns home with Dyson. At first, she feels rejuvenated being back in her old haunts and living the life that she was forced to abandon, but things quickly take a turn when Kenzi fills her in on what happened while she was gone.

On the next episode of Lost Girl, Kenzi confesses that she kissed Dyson while Bo was out of commission, something that could potentially ruin their friendship. Granted, Bo isn’t exactly Captain Monogamous herself, but in her mind, it’s different when all parties are privy to the arrangement than when a friend goes behind another friend’s back and does something that might not be acceptable otherwise. Even with her loved ones all having the case of amnesia that wiped her from their minds, one of the mitigating factors in Kenzi hooking up with Dyson, Bo is still someone who values honor and loyalty above all else and ironically, she might not be able to forget that Kenzi and Dyson were together. No matter how understanding she might be about the circumstances in which her friends betrayed her, the chances of Bo and Dyson starting the next chapter of their relationship on solid footing could be in serious danger unless she finds a way to get over what happened with Kenzi.

Elsewhere on Lost Girl, Bo’s anger and frustration at Kenzi cause her to confront a dangerous foe and learn a shocking secret.

Lost Girl airs Mondays at 10:00 on Syfy. You can check out a recap of the most recent episode here.

Does Bo have reason to be upset with Kenzi or Dyson over their kiss? Could this cut off any chance Bo and Dyson have at giving their relationship a second chance? What type of secret will Bo learn from her confrontation?