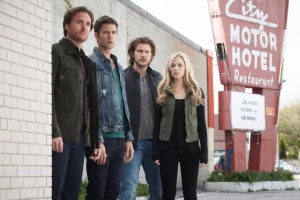 The main reason that Elena fled Stonehaven and sought refuge in Toronto was the trauma of being turned into a werewolf by Clay. She needed a certain amount of distance from any reminder of who she once was and the pain she went through upon her first transformation; though she may be the first woman to survive the change, Elena is someone who wants nothing to do with her power and who has tried with all her (considerable) might to hang on to any slice of normalcy that she can, sometimes to her detriment. She doesn’t have that luxury of hiding anyway anymore, not when the Mutt threatened to expose the pack and not when Peter was taken down by an unknown assailant, and the more time she spends in the confines of her past, the more it seems she’s rediscovering the feelings she thought she left behind.

On the next episode of Bitten, Elena is dealing with her attraction toward Clay as the two wake up naked beside each other following a run. Since she’s been back at Stonehaven, Elena has tried to avoid engaging with Clay and has opted to internalize her feelings for him rather than let herself feel what she felt when things were good between the two. In her mind, Clay symbolizes everything she doesn’t want in her life, an embrace of the wolf within that she wants nothing more than to get rid of, and she doesn’t want to let herself get too close to falling back into a world of territory disputes and nightly runs. Elena wants the safety and comfort that Toronto has to offer, all of which Philip represents for her, and although she might still have lingering feelings for Clay, she can’t let herself acknowledge them if she has any hope in making it home safe and sound.

Do you think that Elena will give in to her attraction toward Clay, even though she loves Philip? Who would be behind a plot to turn psychotic killers into werewolves? Will Peter’s death be the thing that causes the pack to implode?