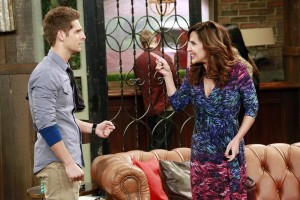 Riley and Ben came to the mutual understanding that while they’re not ready to be in a relationship with one another just yet, it’s a possibility one day in the future. Until then, they have to begin rebuilding their friendship following what ended up being a painful, confusing breakup that nearly destroyed a decades-long friendship in the process. Also on the agenda is the issue of moving on to other people; as she’s been in love with Ben for years, Riley will have the most difficult time transitioning from being Ben’s girlfriend to being his friend once again, but in her case, it might be better to get out in the dating world sooner rather than wallow in her sadness or insecurity. She’ll regain her self-confidence this way and there’s a chance that maybe, just maybe, she’ll meet someone who can take her mind off Ben once and for all.

Wednesday, February 5th – “Bonnie’s Unreal Estate”
When Riley’s firm is hired to represent the scandalized Reverend Stockdale, she is charged with making sure his daughter, Piper (Lucy Hale), stays out of trouble – a task that seems relatively easy given Piper’s boring personality. But when Riley’s away, Piper will play, and Danny and Tucker find themselves tangled up in her wild child ways. Meanwhile, Bonnie’s real estate career is off to a sizzling start when Ben unknowingly burns down her first listing.

Wednesday, February 12th – “Life’s a Beach”
When Ben’s rooftop beach gets shut down by the current apartment Board President, Sondra (Rachna Khatau), the boys campaign to overthrow her and preside over the building themselves. The only problem is they have to decide who has the best chance to win the election, which won’t easy given their spotty history with the other tenants. Meanwhile, Bonnie drags Riley on a double date with her boyfriend Brad (Peter Porte) and his twin Tad (Peter Porte), but it doesn’t take long until the ladies suspect that Brad has made Tad up in order to escape accusations of infidelity.