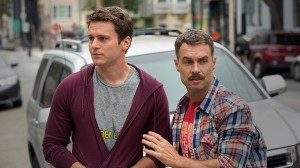 The moment that Patrick decided that he was over the search for a boyfriend, he met someone who seems like he could be something more in Richie. Not only was Richie the most intriguing guy that Patrick’s met in a while, their interactions possessing the type of chemistry that was lacking in Patrick’s date with the OKCupid doctor, he was someone who the video game developer wouldn’t have initially saw himself with, which makes the prospect of being with him exciting. With a guy like Richie in his life, though, can Patrick let go of his desire for something less serious and embrace the idea of commitment?

On the next episode of Looking, Patrick and Richie go out on their first date and soon enough, the former is suggesting the two go back to his place. Thus far in his young love life, Patrick has always conflated sex and love/interest, but there’s a reason he hasn’t been able to have a relationship last for the better part of a year. For even his most serious of boyfriends, Patrick has put sex ahead of connection and intimacy, leading their relationships to become shallow and easily disposable, and he doesn’t really know how to relate to a guy on a non-physical level. As such, he runs the risk of ruining something very real and very honest with his need to rush into his sexual comfort zone and his fear of opening up to someone and getting hurt. Can Patrick sober up enough to realize that he might be letting a good thing slip through his fingers?

Elsewhere on Looking, Agustin officially moves in with Frank, while Ethan tells Dom that he’d like to start over as friends.

Looking airs Sundays at 10:30 on HBO. You can check out the full series premiere here.

If Patrick’s first date with Richie doesn’t go well, do you think there’ll be another? Is Agustin ready to take his relationship with Frank to the next level? How will meeting with Ethan impact Dom’s feelings on his current situation?