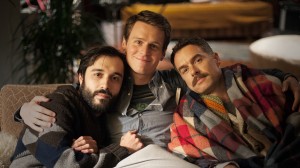 HBO has announced that new episodes of Girls and Looking will air Saturday, February 1st beginning at 10:00, with the same episodes, which will be made available On Demand and through HBO Go January 27th, repeating at the same time the following day. The reason for the schedule change is that no network, be it cable or broadcast, wants to put original content against the Super Bowl, so HBO will be putting True Detective on a one-week hiatus in addition to relying more on cumulative audience for Girls and Looking.

Unfortunately, this is just the type of thing that could harm the chances of Looking, which didn’t get off to a good start in the ratings this past Sunday. Although word has it that HBO has been encouraged by the amount of press coverage the gay-themed dramedy has received, it still needs the type of momentum that comes with airing on a weekly schedule, a chance to build enough of a live audience for a renewal to be financially feasible. Live ratings might not be the end-all, be-all for HBO the way they are for broadcast networks, as HBO also takes into account buzz and cumulative weekly audience, but they’re still important enough to where disrupting a show’s airing pattern, especially one that premiered against a hugely rated NFL game, could be harmful to its future.

Girls, though, won’t have to worry about its audience, since it hit a series high with its one-hour season premiere and was renewed for a fourth season at the show’s recent TCA panel.

Have you been watching Girls and Looking this season? Do you think that Looking will attract enough attention to overcome its paltry ratings start and earn a second season renewal? Should HBO hold episodes of both comedies rather than relying on people to find them through other means?