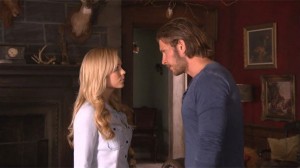 All Elena wants is the life she cultivated for herself in Toronto back. As skilled a tracker as she may be, she’s spent every day since she was bitten by Clay denying that part of herself and looking to put a significant amount of distance between herself and the most traumatic experience of her life. While she did end up coming when Jeremy called the pack back to Stonehaven, if only out of her loyalty to him and Logan, Elena’s been trying to step on the gas pedal when it comes to the Mutt; the quicker she’s able to track him down and bring him to justice, the quicker she’ll be able to return to Toronto and her life with Philip. But what happens when she finds out that there might be a way to leave the pack for good? Is she willing to do whatever it takes to have the normal life that she so desperately craves?

Monday, January 27th – “Trespass”
Old feelings come to surface for Elena and Clay, who find themselves in a dangerous situation when they track the Mutt to a warehouse and he turns into a wolf.

Monday, February 3rd – “Grief”
Elena and Clay deal with their growing sexual tension as they work together to figure out the who and why behind the plot to turn psychotic killers into werewolves.

Monday, February 10th – “Bitten”
Elena is overwhelmed with memories of her romance with Clay, including the day she was bitten by a werewolf, as she defends him against murder accusations; at the same time, Clay’s character is put into question when former Pack member Daniel Santos shows up with information on the Mutt uprising.

Monday, February 17th – “Committed”
Elena returns to Toronto, but her human life with Philip is interrupted when Santos arrives with a way out of the Pack. Elsewhere, at Stonehaven, Jeremy must fight to keep his Alpha status in tact.

Is Santos being truthful with Elena about how to leave the pack? Can Jeremy keep his Alpha status at this important time in the pack’s development? How long will Elena and Clay be able to deny their feelings from one another?