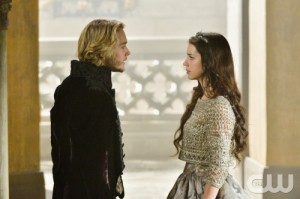 As far as anyone in the castle knows, rumors of a ghost lurking in the passageway are just that – silly tales concocted by those who either fell for tricks their mind’s eye played on them or who merely saw what they wanted to see rather than what was actually there. However, Clarissa is very much alive and dangerous, seeing as how she’s separated herself from Nostradamus and proven that she’s willing to do anything and everything she has to in order to protect Mary. Now that she’s roaming the castle unattended and unrestrained by the lack of ties to bind her to anyone, bar her obligation to Mary, Nostradamus might have no other choice than to reveal the truth about Clarissa, lest she hurt someone else in the name of keeping Mary alive. But will anyone in the castle actually believe him?

Thursday, January 23rd – “For King and Country”
When Mary (Adelaide Kane) and Bash (Torrance Coombs) are captured and forced to return to the castle, they discover Catherine (Megan Follows) waiting and even more determined to keep Mary and Francis apart. Francis learns of the prophecy, but his determination to wed Mary changes everything: in love in politics, tearing the bond of brothers apart, and hardening Catherine’s resolve to destroy Mary at any cost.

Thursday, February 6th – “Inquisition”
When King Henry (Alan Van Sprang) accuses Queen Catherine of treason and adultery, she sets out to save her life by exposing Bash’s dark past. Mary and Bash go on a quest to expose an even more deadly secret from Catherine’s past. Meanwhile, Nostradamus (guest star Rossif Sutherland) reveals the truth about the castle ghost, Clarissa (guest star Katie Boland), which shocks everyone.

How do you think those in the castle will react to the truth about Clarissa? Will Catherine be able to save her own life? What type of tie would Isobel have to Bash?