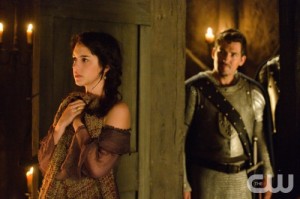 Though Mary ultimately left the castle as means of protecting both herself and Francis, a benefit of putting distance between herself and the residence she had for the past several months was that she no longer was reminded of the destruction she had bore witness to. Aylee’s death was one step too far in terms of what she was willing to put up with to become queen and instead of subjecting all those around her to the dangers of French court, she opted to leave and bring the black cloud that hung over the castle with her. However, once she gets forced back due to King Henry’s men, she begins digging into who was truly responsible for the death of her friend after receiving word that the fall was merely insurance in case the true mode of death, the poisoned glass, didn’t take.

On the next episode of Reign, Mary confronts Catherine about Aylee’s death and the poisoning that Kenna narrowly avoided. Instead of lying, though, Catherine comes clean about being the one to give Diane the poison, but she rejects the idea that she was the one who put the poison in the cup that ended up with Aylee. Having grown jaded in her time at the castle, it’ll be hard for Mary to believe that, since Catherine stood to gain from the poisoning. It would show Mary that Nostradamus’ prophecies are true and strengthen her desire to stay away from Francis for fear of his death coming thanks to their union, while Catherine would be able to find a “suitable” wife for her son, one whose presence in the castle would not lead to the catastrophes that Mary’s had. But Catherine wasn’t, in fact, the one who poisoned Aylee and until that can be proven, or until Mary finds another strong lead, things might become even more tense between the present and future queens of France.

Elsewhere on Reign, Francis learns of the prophecy, changing the entire dynamic that exists within the castle.

Should Mary go back to Scotland and use Catherine’s connections to find a husband? Do you think Mary will believe Catherine’s denials about poisoning Aylee? When will those in the castle learn the identity of who was really responsible for Aylee’s death?