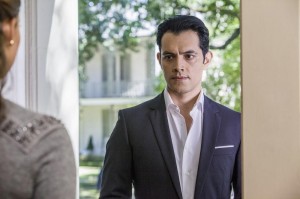 In the early days of the investigation into the curse, the Cursed Five felt very much alone, as no one understood what they were going through or the pressure they were under in terms of breaking a nearly 100-year-old curse that threatened their mortality. But the more they kept digging into the history of the pact, the more they saw that other people were aware of its existence but didn’t want it to end for whatever reason. While they knew that something was up with Mrs. Grunwald, who has her mother watching over her due to the curse, and Mr. Collins, there are others in town who might not be as obvious about their knowledge of the pact but who could point them in the right direction. Namely, is there a chance that Springer knows more about the pact than they do?

Listed below are the dates, titles, and descriptions of the next two episodes of Ravenswood.

Tuesday, January 21st – “I’ll Sleep When I’m Dead”
When Remy goes to a sleep clinic in the hopes of finally getting some rest, she learns her dreams about the mysterious pact may have started before she even realized. However, it soon becomes apparent that the clinic may be the least safe place for Remy to be. Olivia discovers some new information about Springer and starts to wonder if he knows about the pact. And Caleb turns to Mr. Price for a lesson in Ravenswood town history. Meanwhile, Miranda struggles with her place within the group and discovers new consequences for leaving the Collins house.

Tuesday, January 28th – “Along Came a Spider”
Mr. Price inadvertently sends Caleb and Miranda on a quest to investigate a secret Collins has been keeping, but it leads them to some startling insight about the pact. With questions about Dillon swirling, Olivia is confused when he finally shows up to help her through her latest crisis. And Remy and Luke are determined to prove that Dillon has been hiding something, which puts Luke in danger. Meanwhile, Caleb starts school in Ravenswood and Miranda tries to keep him company, leading to an awkward incident.

What do you think Springer knows about the pact, if anything? How much insight will Caleb and Miranda gain about the pact during their investigation? Will Olivia realize that Dillon hasn’t been totally honest with her?