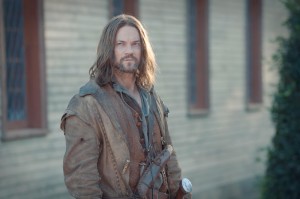 WGN America has announced that upcoming drama Salem is set to premiere Sunday, April 20th. The series, co-created by Adam Simon (The Haunting in Connecticut) and Brannon Braga (Terra Nova, FlashForward), will be the first original scripted series on WGN, which is transitioning from a regional, Chicago-based network to one with a national identity.

Currently in production in Louisiana, Salem is set to reexamine the 17th century Salem Witch Trials, exploring the effect that fear, paranoia, and groupthink had on a small town. The series will argue that while there were indeed witches within the Salem city limits, they were misunderstood both then by the townsfolk and now, following centuries of having the more salacious aspects of their story be the only thing that survived their ordeal.

Witches became a hot property over the last couple of years with The Secret Circle, Witches of East End, and American Horror Story: Coven all being developed to varying degrees of success, in addition to a Charmed reboot currently in development at CBS. However, Salem is the only period drama of the bunch, a group of present day-set dramas, which could be the major thing that sets it apart from the pack. Also working in its favor: the recreated historical village, complete with architectural elements present at the time of the Salem Witch Trails, the show is shooting in.

You can check out three teasers for Salem below.

Will you be watching Salem? Do the teasers make you more apt to give the show a try? What do you think the show can do to differentiate itself from the other witch-themed shows that have premiered recently?