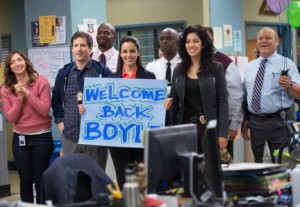 The 71st Golden Globes were handed out Sunday night and on the television side, Breaking Bad and Brooklyn Nine-Nine were the leading recipients, each taking home two statues apiece. While the critically acclaimed AMC drama won its first Globes for Best Television Series – Drama and Best Actor in a Drama Series for Bryan Cranston, the upstart FOX comedy surprised in both its categories, winning Best Television Series – Comedy over the likes of Girls and Modern Family and Best Actor in a Comedy Series for star Andy Samberg. The television winners included several surprises, as is the calling card of the Golden Globes, with Parks and Recreation‘s Amy Poehler taking home her first award for portraying Leslie Knope, Elisabeth Moss triumphing over Jessica Lange and Helen Mirren, and Jacqueline Bisset being honored with the Globe for Best Supporting Actress for international miniseries Dancing on the Edge.

Other television winners included Behind the Candelabra, Michael Douglas, Jon Voight, and Robin Wright. A full list of winners is below.

What did you think about the 2014 Golden Globes? Which surprise win was your favorite of the night? Which show or performer was most egregiously snubbed?

Best Mini-Series or Motion Picture Made for Television
American Horror Story: Coven
Behind the Candelabra ***WINNER***
Dancing on the Edge
Top of the Lake
The White Queen