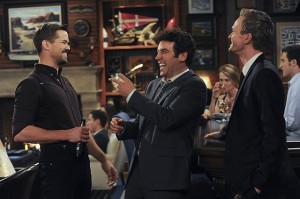 My apologies for the lack of reviews for the last two episodes of How I Met Your Mother – blame finals – but I am finally able to get some thoughts about the show down again, and this was a great episode to dive back in with. “Bass Player Wanted” gave us the first substantial look at the mother and how she will fit in with our five favorite friends.

“That’s how Marshall met your mother”

When “Bedtime Stories” (see below) left off, we saw Marshall setting out to walk the last few miles to Farhampton after the bus broke down to a new arrangement of “Marshall versus the Machine” (originally heard in “Subway Wars”).  However, in tonight’s episode he’s beginning to fade just as a white van pulls up with the mother in the driver’s seat.  She offers to drive Marshall the rest of the way, and after jokingly predicting his situation (revealing in the end that she’s already met Lily), she announces that she will be leaving as soon as she drops him off.

Her once fun band, started with business school classmates – Super Freakonoics – has been taken over by “the devil”, also known as lead singer Darren (guest star Andrew Rannells).  He plans to have her kicked out of the band, so quitting seems like a better idea.  Marshall, sensing someone too-nice, like himself, urges her to stand up for herself.  She’s already gotten a decent start with Lily’s “Aldrin Justice” angle, stealing Darren’s van, but she’s clearly still weary.

Meanwhile at the Farhampton Inn Darren is doing a stellar job of ruining everyone’s friendships,  reinforcing exactly why it is the mother hates him.  According to her, he begins by making you feel hilarious and adorable, then finds a flimsy connection based on where you’re from , and finally tells a deep personal secret about his past that steals from Disney films (generally Bambi, though The Lion King and Finding Nemo make appearances).  He slips to Lily that Robin is on Marshall’s side, and tells Barney of Ted’s plan to move to Chicago, effectively putting everyone at odds.

The damage is repaired after Ted steals a bottle of scotch to make ammends with Barney and Robin, in admitting that she’s not a fan of losing her best friend to Rome, holds up Marsh-pillow for Lily to punch in anger.  Darren gets his due when he bumps into Ted, making him drop the third bottle of precious 30 year-old scotch, and Ted slugs him.  The drama pushes him to quit the band, which makes the mother so happy that she buys a drink for the mystery best man who solved her problem.

“Bass Player Wanted” was one of the most loyal-to-character episodes the show has aired.  Everyone had a respectable stance in the story, with their own threads that effectively added to character development.  Robin moved on from her more independent nature, admitting that she will miss her friend while Lily and Marshall, though in their own space are upset and ready for a fight, still commit to each other and “pause” upon being reunited.  Barney reaffirmed that though he can be on the jerk-ish side at times, he’s still Ted’s bro, and Ted, in turn, tries to do what he believes is best for his friend, ultimately breaking a personal rule for him.

The mother in the meantime, has quickly become a favorite character of mine.  Though we’re still catching glimpses, the lead-in to the audience meeting her has been perhaps one of the most effective, and consistent character reveals.  Throughout the show’s history hints have been dropped about her, and thusfar she is exactly who we could expect her to be.  Kudos to Cristin Milioti.

This is exactly the episode I was asking for, as in recent weeks I have felt like the story has strayed too much from Ted and the core of the goal, and added relatively useless fluff.  Not that I have anything to complain about – I thoroughly enjoyed the show’s last two episodes – but neither has done much to Ted’s credit or character at all, or extensively moved the story forward.  I felt as if this episode was far more balanced and had important statements for each character, and now that the mother is officially in Farhampton, How I Met Your Mother is officially in the home stretch.

When the show returns in the spring, How I Met Your Mother will hit it’s 200th episode, Lily and Marshall will presumably solve their career dilemma and Barney and Robin may or may not get married.  But most importably, Ted will meet the mother.

The only question there is….when?

Oh, but don’t forget the impending slap and “To Be Continued”…