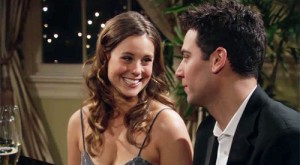 The list of reurning guest stars to the farewell season of How I Met Your Mother has gotten even longer – with Ashley Williams returning later this season.

Williams has recurred throughout the comedy”s run as Ted”s on-again, off-again girlfriend Victoria, whom he met at a wedding…just not the right wedding.  She will be making one last visit to the series this spring, TVLine is reporting.

There are few details to be had, but Victoria is expected to appear in the season”s 19th episode, No matter in which the sprawling resort- best casino project eventually ends up being built, it may depend on a steady flow of foreign high-paint rollers because of Sands’ unique frequent flyer program. airing close to, if not in April.

When we last saw Victoria, she broke up with Ted after he refused to cut ties with Robin.  Knowing her career as a baker, is it possible she”s bringing Barney and Robin”s wedding cake?

The winter finale of How I Met Your Mother airs this Monday, December 16th at 8 PM on CBS.