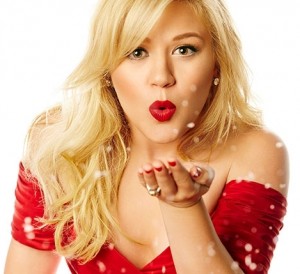 The ‘Stronger’ singer, Kelly Clarkson has been tapped to appear in an episode of the ABC drama Nashville. Kelly’s holiday album, by the
name of Wrapped in Red just came out and she is all set to perform a song on Nashville’s forthcoming episode Radio.com reports.

Nashville is all about the genre of Country music and Kelly Clarkson is known to be a fan of this genre, but apparently, this time she’s game to explore something else than country on her recent role, where she is playing herself in Nashville. In her cameo on Nashville, Clarkson is said to perform a dream pop classic of Mazzy Star, from the 90’s called ‘Fade into you’. Well, that’s quite upbeat and out of the ordinary than her favorite and usual genre, country. Kelly will be performing the classic along with the Nashville stars, Clare Bowen, playing Scarlett O’ Connor and Sam Palladio, who plays the character named Gunnar Scott.

Besides Kelly Clarkson, there have been tons of other famous artists who have been featured in many episodes of the TV show Nashville. These stars include Chris Young, Dan Auerbach and Brantley Gilbert from the band The Black Keys, Brad Paisley, Vince Gill, among many other music artists being a part of the show. So, Clarkson’s fans look out for your favorite star on Nashville soon!