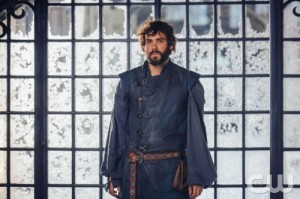 For most of her time in France, Mary felt decidedly alone, despite the fact that she was engaged to Francis. With Catherine’s not-so-subtle resentment toward the girl who would become the next Queen of France and Francis’ hesitation in giving his heart to his betrothed beyond the needs of the alliance, it was a dark time for Mary, who was only able to find refuge in the company of her ladies and Francis’ brother Bash. However, the castle falling under siege turned out to be the best thing for her situation, as Mary earned a little respect from Catherine for her obvious dedication to Francis and the prince was able to see how much Mary meant to him when there was the possibility he would never see her again. Is Mary now able to relax and live the life she always dreamed of in France?

On the next episode of Reign, Mary learns of the prophecy Nostradamus had that her presence would bring about Francis’ death. Said prophecy had already been guiding Catherine’s actions and attitudes throughout the season and now Mary must bear the weight of what her presence in France could inadvertently bring about, just as she and Francis were ready to take the next step in developing their relationship. Even though a part of her might still want to keep Francis close to her, considering all that she went through to get him on her side and the feelings that she possesses for him, Mary knows that she could never forgive herself if she played any part in Francis’ death, so at least until the prophecy fleshes out or can be disproven, she’s going to have to push Francis away. But will she tell him the reason behind her sudden change of heart?

Elsewhere on Reign, Clarissa becomes bolder in her endeavors, while Kenna informs Catherine of Diane’s plans to have Bash declared legitimate.

Will Mary push Francis away for his own safety? Just how bold will Clarissa become? Is Kenna’s attempt at getting on Catherine’s good side going to work?