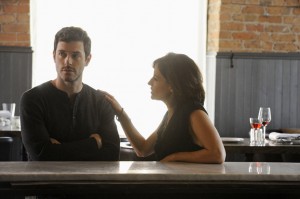 Whether it be his sense of justice, his desire for glory, or his grudge against Jack, Drew hasn’t let the Karsten case die, even when it looked as if there would be no lead for him to follow. Though some may say that he’s wasting his time or that he’s not pursuing the case for the right reason, Drew got what he thinks is a major break during the last episode of Betrayal when Karsten approached him with accusations against Jack. In his mind, the accusations don’t even have to be plausible or likely, which these aren’t considering Karsten’s past with Jack; he just has to have a direction in which to charge. It helps, though, that now he’ll be pursuing the man who helped break up his marriage to Sara.

On the next episode of Betrayal, Drew digs deeper into the Mrozek case and continues listening to Thatcher’s whispers in his ear. The best case scenario? Jack killed Lou and hid the gun in TJ’s Impala or, at the very least, has some type of tangible connection to the person who did it. That way, Drew gets his revenge and the commendation that comes with closing such a high-profile can, but what if Jack is innocent and has no involvement in Lou’s murder? Pursuing Jack will lead Drew further away from who actually committed the crime, while the situation could only exacerbate the anger he holds and endanger several lives in the process. Finding Lou Mrozek’s murderer is an important task and something that Drew should pursue if he feels like he has a real lead, but the more he goes after Jack, the more he’ll only end up hurting himself or someone he loves.

Elsewhere on Betrayal, Elaine and Aidan struggle to define their relationship, while Jack takes a big step in his relationship with Sara.

Do you think that Jack killed Lou Mrozek? How long will Aidan be able to keep his secret from Elaine? Is Drew grasping at straws in listening to Karsten or could there be a method to his madness?