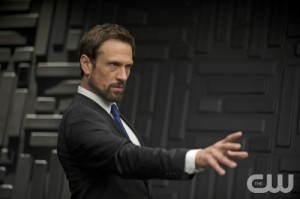 Regardless of his guilt over killing Stephen’s father or whether he thinks he’s a good leader, John is still seen, both by his peers and by Ultra, as the frontman of the Tomorrow People movement, which makes his capture at the hands of The Founder all the more crushing. Having him be brought in for Jedikiah’s kidnapping is a blow to the morale of the Tomorrow People, as it magnifies the threat of Ultra and gives them a glimpse at a life without their fearless leader, and could result in their secrets being forced out of him through various interrogation techniques. But John isn’t just any breakout brought in by Ultra agents; he’s mastered his powers and he’s been inside the organization itself, so if they think they’re going to break him quickly, they’re sadly mistaken.

On tonight’s episode of The Tomorrow People, Ultra has sent in their biggest gun – The Founder – to interrogate John regarding the kidnapping and any other piece of Tomorrow People information that could be used to their advantage. However, motivated by the sense of duty he has to his people and the guilt he feels from lying to them about his ability to kill and the fate of Stephen’s father, John is ready to deal with any tactics Ultra throws at him, both as a way to atone for the sins he feels he’s committed and a stall technique to give Stephen, Cara, and Russell time to formulate a plan to save him. Admirable as that may be, not even John can hang with The Founder for very long, so even if the Tomorrow People come up with a solid plan for busting him out, just how long does he have before he’s changed for good?

Elsewhere on The Tomorrow People, Stephen decides to take drastic steps to uncover the truth about his father, while Cara and Russell attempt to negotiate a trade with Jedikiah that puts the latter at great risk.

Will John be able to get out of Ultra alive and in tact? How much of his father’s fate will Stephen learn? Is working with Jedikiah the wisest move for the Tomorrow People right now?