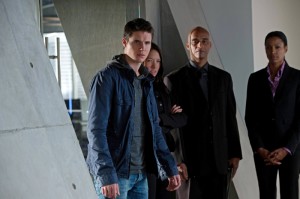 Although they’re going to have to face off with him eventually, the Tomorrow People are correct in not wanting to engage with Jedikiah right now. He’s too powerful and protected for them to get a clean look at and even if they formulated a perfect plan for them to take him out, there’s no guarantee that the next boss at Ultra won’t be even worse for their well-being. If they manage to grow their ranks and improve their powers while using Stephen’s placing at Ultra to find the information necessary to bring down Jedikiah once and for all, they do have a shot at making the game-changing move against the corporation, but for now, it’s about keeping the peace amongst themselves and trying to stay hidden from Ultra.

On the next episode of The Tomorrow People, Jedikiah finds Russell in his home and after a scuffle, gets himself teleported to the subway tunnel base of the Tomorrow People. Thus far in their battle against Ultra, the Tomorrow People have managed to keep their distance and stay just hidden enough to where their safety is assured once they make it to the tunnel; they might get caught out in public or find themselves exposed without a way to duck back into the shadows, but if they teleported back into the tunnel, then everything would be okay and they could regroup accordingly. Now that Jedikiah has seen their base, though, he has a strong lead to follow and could eventually suss out where the Tomorrow People have been staying during his extended war with them, so even if John, Cara, and the like get him out before he picks up any clues about where he is, they still need to look for a new place to house them and their people.

Elsewhere on The Tomorrow People, Stephen formulates a plan to dig up information on his father by getting inside Jedikiah’s mind and snooping around Ultra.

How will Jedikiah react to being in the subway tunnel of the Tomorrow People? Will Cara or Russell be able to teleport him back out before he does any damage? What will Stephen find out about his father while snooping around Ultra?