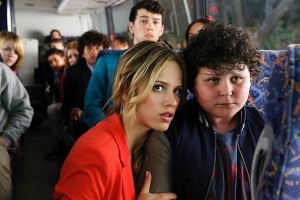 NBC has released the first previews for upcoming conspiracy thriller Crisis, which isn’t slated to premiere until sometime this coming spring. Created by Rand Ravich (Life), the series tells the story of Ballard High School, a place where the children of all D.C.’s elite figures receive their education. When the school’s field trip bus gets ambushed and both the students and the chaperones taken hostage, a national crisis breaks out and the country begins holding its collective breath that everyone can return safely and soundly. But the closer the authorities get to finding out who’s behind the abduction and what their terms of releasing the hostages are, the more it looks like the incident wasn’t random and the greater the possibility that someone on the inside is responsible for the incident.

Currently, Crisis is scheduled to air Sundays at 10:00 once the Winter Olympics are completed, where it will follow fellow newbies American Dream Builders and Believe, the latter from Gravity director Alfonso Cuaron and J.J. Abrams. Sundays are already increasingly difficult for broadcast networks to deal with, considering the glut of programming vying for the same audience, and while an entire night of new shows didn’t pan out for ABC Tuesdays this fall, Crisis might have an outside shot in getting the type of sampling necessary to survive. Granted, fellow shows of its ilk Zero Hour, Cult, and Hostages failed to find an audience, but the previews for Crisis are loud and frenzied enough to where it doesn’t look like a show that will be ignored upon its debut. With its broadcast competition decidedly limited (a weakened Revenge, a fading The Mentalist), this could be the crazy conspiracy drama that rises above a potentially limited premise and finds an audience for itself.

Will you be watching Crisis? Do you think the show will find an audience on Sundays at 10:00? How long can a show with this premise feasibly last?