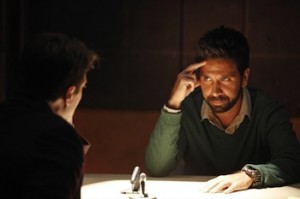 Okay, I had a much different opening for this review when I watched “Time Will Tell” the first time around. My expectations for Monday night’s episode were so high that it sort of ruined my viewing experience. It actually took me watching it for a second time to find it incredibly awesome. That’s my problem. I usually put Castle on a pedestal that it sometimes ruins an episode for me.

From the moment I saw Joshua Gomez in the promo for this episode I was extremely excited. It was Morgan! Our favorite bearded friend. It had a time travel element, so it had to be awesome right? What sold me on tonight’s episode was Joshua Gomez. More on his performance later. I should also mention “Time Will Tell” was written by Andrew W. Marlowe and Terri Edda Miller, so you know it had to be great.  We got great character moments like Esposito and Doctor Who and the 3 kids scene with Castle and Beckett and such heartfelt scenes with Castle and Alexis. Anyone who knows me, knows I love anything time travel, but what I didn’t like about “Time Will Tell” was the conclusion of the case. It ended up being all about revenge. We did get a great Beckett interrogation room scene, even though Ward didn’t say anything for himself. Just because I didn’t like how they wrapped up the case doesn’t mean I didn’t like the episode.

Having Beckett back at the NYPD was really great though. The team didn’t miss a beat. Pi was still around, but he wasn’t going to be staying at Castle’s for that much longer. Pi and Alexis found an apartment and would be moving in together. Castle was definitely not pleased with that piece of information. There wasn’t much Castle could do though and the more he pushed Alexis the worst it became. I loved Beckett giving Castle advice about Alexis. I totally agreed with Beckett. It was a good thing for Alexis. Beckett was saying Alexis sees that Castle is starting something new with Beckett and maybe Alexis is trying to figure out how she fits in. It’s all about Alexis growing up.  Alexis needs to make her own mistakes, and learn from them. That’s what growing up is supposed to be. It was such a sweet scene. I love how Beckett is always the voice of reason for Castle. She sort of brings him off the ledge. She’s the yin to his yang. I could understand Castle freaking out about Alexis moving in with Pi. Alexis only met him a month ago, but I feel like Alexis needs to do this. It is her life, and she has to live it the way she wants.

So back to the freaky case. Am I the only one still thinking about that ending at the precinct? You had Castle totally freaked out about Doyle just disappearing, then Beckett totally freaked out about spilling coffee on the letter from the future or whenever it was from. When she looked at the letter that had the exact same coffee stains, I swear I got the chills. The ultimate skeptic Beckett being all wtf? That’s pretty epic. I might have to watch this episode a few more times to even comprehend it all. Was she starting to believe Doyle could have been a time traveller? Stana Katic’s facial expression was priceless.

Everyone was great, but the shinning star in Monday’s episode had to be Joshua Gomez. So far this season the guest stars have held their own and have really made an impression. He really was fantastic as Simon Doyle, a Temporal Anthropologist from the year 2035. As the episode went on I was actually starting to believe he was a time traveller. He was just so passionate and convincing. Could he really have been a time traveller? I know skeptic Beckett was questioning herself and the way the episode ended, it sure looked like he was telling the truth.

There were so many great lines from the episode, I just had to list them. If I missed any, don’t be shy and leave them in the comment box below.

“You watch Doctor Who?” – Castle

“I know Castle, but think about all the great times that you have to look forward to in her future and in ours.” – Beckett

Castle: “How did you know I marry her?”

Simon: “One of your book jackets. You know, ‘Richard Castle lives in New York with his wife, Senator Beckett and their three children.’”

Simon: “Yeah, Yeah Yeah. It was kinda hard for me to believe myself given all the crazy stuff that goes on between you along the way.”

Simon: “I can tell you though that I’m really glad you stopped writing those stupid mystery books, okay because your serious literature is so much better.”

Castle: “Beckett, you hear that?”

Beckett: “Ya I heard, and I’m the president of fantasy land.”

So, Castle got his couch back, but at what cost? I loved that Alexis told Castle it was her future and she had to do this. Will Castle’s feelings about this change his relationship with Alexis? I always forget that Alexis is a grown up and not a little girl. There comes a time in our lives when we must move on and make our own mistakes. How will we ever learn if we don’t take chances? I’d love to know what you guys thought of the episode. Sound off below.