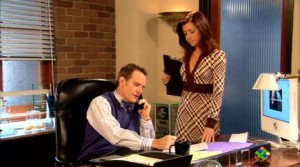 How I Met Your Mother has added yet another star to Season 9.

Breaking Bad‘s Bryan Cranston will be returning to the series to reprise his role as Hammon Druthers, Ted’s former boss, CBS announced on Wednesday via Twitter:

Cranston last appeared on HIMYM in Season 2, as Ted’s boss, and then employee at an architecture firm.

Also recently announced, William Zabka will be returning to the final season.