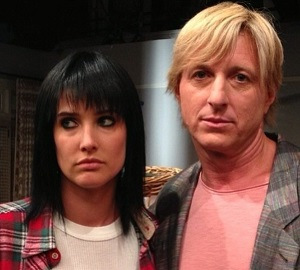 It’s a double comeback for William Zabka, the “villiain” from The Karate Kid, previously seen last season on How I Met Your Mother.

Zabka will be returning once again to appear as himself in at least eight episodes in the upcoming season, per Entertainment Weekly.

The show’s creators had hoped to keep his appearance a secret, but actress Cobie Smulders posted the photo of herself and Zabka on Instagram on Friday with the caption: “Would you buy this band’s album?”.

Perhaps “Robin Daggers” and William Zabka share a secret past?

Zabka was first seen on HIMYM last season in episode 22, in which Robin, Ted, Marshall and Lily conspired to give Barney the worst bachelor party ever.  According to EW, Zabka is expected to become a friend of Barney’s during the final season, which premieres September 23rd.