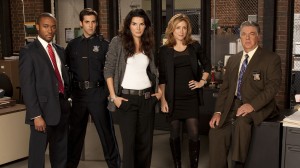 After four seasons Janet Tamaro will be stepping down as showrunner of Rizzoli & Isles.

According to Variety, Tamaro has decided not to renew her contract for the TNT crime drama’s fifth season, but will remain on board as a consulting producer.  Tamaro developed Rizzoli & Isles for television from a series of novels form Tess Gerritsen, and has been at the show’s helm since it’s premiere on TNT in 2010.  She has served as a writer, executive producer, and shorunner.  Her departure from the showrunning role comes after recent rumors of discord on set for the past few months.

A new showrunner has not yet been named.

Tamaro cited the recent suicide of R&I cast member Lee Thompson Young as a factor in her decision, a “catalyst for me to examine what I want to be doing next.”  Currently, she is in talks with Warner Horizon TV, studio behind R&I, for the potential development of new TV projects, beyond procedureals and into serialized TV drama.  She also has a deal with new Regency for a female-driven suspense thriller.

Tamaro told Variety that she is confident that the show will start strong in season five, while the final episodes of the show’s fourth run will air on TNT early next year.