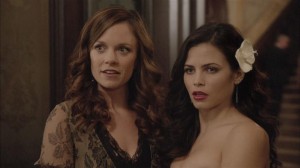 Joanna Beauchamp has been careful to keep her daughters Ingrid and Freya in the dark about the family secret. For their entire lives, she’s protected them from the fact that they come from a long line of witches and that they themselves have been gifted with powers from birth, as she wanted them to live the normal, happy lives that she was never able to herself. While it might not be totally ethical to deny the two women such a big part of themselves and not allow them to make the choice about how they handle their newfound responsibilities, Joanna knew that once they found out about who (and what) they really were, things would never be the same.

On the series premiere of Witches of East End, Joanna is forced to tell Ingrid and Freya about their abilities due to a threat coming to town, something (or someone) willing to do anything and everything in its power to hurt her and her family. After receiving a warning from her sister Wendy and becoming aware of the strange events that have begun happening in her daughters’ lives, the Beauchamp matriarch realizes that now is the time to come clean or else the girls won’t have enough of a handle on their powers to battle back against whatever’s lurking in the darkness. Plus, there’s no guarantee that either daughter will immediately be okay with learning that she’s been lied to for decades by the person she thought she could trust most in the world, so if Joanna wants to give them enough time to get their frustrations out before work has to begin, she has to tell them sooner rather than later.

The series premiere of Witches of East End airs Sunday, October 6th at 10:00 on Lifetime. You can check out key art for the series here.

Will you be watching Witches of East End? What do you think about the latest promos released for the series? Can the show cut through the Sunday television traffic jam and find an audience?