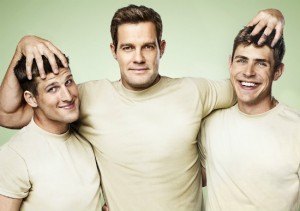 FOX has announced that the series premiere of military comedy Enlisted has been pushed from Friday, November 8th to Friday, January 10th, in an attempt to take advantage of the network’s winter sports platform. Filling the opening left by the series, created by Cougar Town‘s Kevin Biegel, will be episodes of Raising Hope, which will also be airing at 9:00 the same night.

Enlisted stars Geoff Stults (The Finder), Chris Lowell (Veronica Mars), and Parker Young (Suburgatory) as three brothers who live and work on the same military base in Florida. While Staff Sergeant Pete Hill (Stults) has to act as both brother and boss, baby sitter and disciplinarian, to his younger brothers, middle child Corporal Derrick Hill (Lowell) makes it very clear that he doesn’t take his time as a soldier seriously, a sharp contrast from youngest brother Private Andy Hill (Young), who immediately loves it. The trio got into the military after being influenced by their late father, but now that they’re all together for the first time in years following Pete being booted back to the U.S. from his tour overseas, they’ll find a new sense of companionship and strengthen the bonds they have with each other through their time at the base.

In addition to Stults, Lowell, and Young, Enlisted stars Keith David (The Cape) as Command Sergeant Major Donald Cody, the man who pledged to look after the boys when their father died, and Angelique Cabral (Friends with Benefits) as confident Sergeant Jill Perez, of Pete’s equal rank. You can check out a trailer for the series, released this past May, below.

Will you be watching Enlisted? Do you think that Enlisted will premiere in January or is FOX delaying it in hopes of plugging it in if one of their other comedies fails? Which FOX series would Enlisted pair best with?