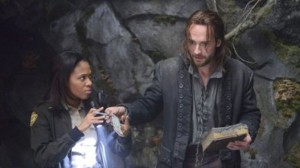 FOX has released promos for upcoming mystery-adventure drama Sleepy Hollow, which stars Tom Mison (Salmon Fishing in the Yemen) as a resurrected Ichabod Crane, who wakes up in the modern age ready to uncover a centuries old mystery. However, the Headless Horseman has also been pulled through time and into the year 2013, meaning that before Crane can begin solving the mystery that transported him through time, he’s got to defeat one of the Four Horsemen of the Apocalypse in a world where he doesn’t have an advantage.

Crane does manage to get an upper hand, though, when he forms an immediate connection with Detective Abbie Mills (Nicole Beharie), a young cop with more than her fair share of experience with the supernatural. Though she’s not entirely sure how much she believes herself, she can’t help but become absorbed in Crane’s quest, especially when their skill sets turn out to be as complementary as can be. If they can keep their distance from the Headless Horseman and continue to grow their bond, they might be able to stop evil from prevailing and allow Crane to see some peace once the mystery gets solved. Standing in their way, though, is the sensitivity the town has to the old legends that haunt their streets and the skepticism that they’ll be confronted with when other people stand in the way of them and the truth. Will Abbie and Ichabod be able to save Sleepy Hollow and destroy the evil threatening to envelope the town once and for all?

In addition to Mison and Beharie, Sleepy Hollow stars Orlando Jones (Drumline) as Captain Frank Irving, head of police in Sleepy Hollow and the biggest skeptic regarding Crane’s true identity, and Katia Winter (Dexter) as Katrina, Crane’s wife who reappears in a series of ghostly visions.

The series premiere of Sleepy Hollow is set to air Monday, September 16th at 9:00 on FOX. You can check out the rest of FOX’s fall premiere dates here.

Will you be watching Sleepy Hollow? How do you think the series will do being paired with Bones and Almost Human? Where would you like to see the story go during the first season?