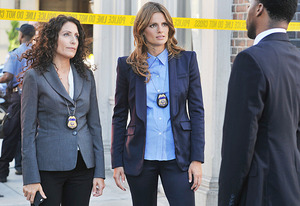 When Castle returns later this month, we will find out the answers to some pretty big questions.  Namely, what were Beckett’s decisions?

The last moments of the hit crime drama saw the detective at a crossroads, with a job offer in DC, and just before the screen cut to black, Castle was down on one knee proposing marriage.  If you’re like me, you’ve been maybe not-so-patiently waiting for the premiere, and have seen the incredible mix of fan reactions on social media.

Just two more weeks and the waiting will be over for everyone.

In the season 6 premiere, “Valkyrie,” Castle and Beckett will deal with the aftermath of the aftermath of those decisions.  House alum Lisa Edelstein will begin her three-episode guest arc as investigator Rachel McCord, connected to Beckett’s job offer.  In an interview with TVGuide Edelsten had this to say about her character:

“What McCord’s done with her life is really inspiring and tempting to Beckett, but it is also threatening to the way of life Beckett’s chosen so far.”

What do you think Castle fans?  Are you excited?  Nervous?  Cautious?  Leave your thoughts in the comments below!