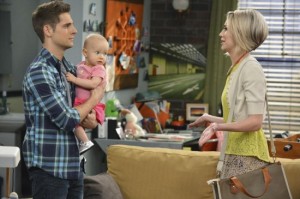 On a day when Danny is worrying about the Riley tattoo he got while intoxicated, Ben is freaking out about finding the letter that Angela left when she dropped Emma at his doorstep. Being that he now has health insurance, he’ll be able to claim Emma as a dependent and needs the letter to prove that he’s her sole guardian. Bonnie claims to have everything that her son needs, but she soon confesses to Tucker that she didn’t file the papers that Angela signed that transferred sole custody of Emma to Ben. Due to the excitement of the baby’s arrival and not having any stamps, Ben does not have sole custody of Emma and it’s up to Bonnie to make things right. Or, well, as right as she can, considering the circumstances.

Meanwhile, Riley shows up at the apartment with a handful of balloons that came from her mother, who tends to give her gifts that she doesn’t want on her birthday. It’s not like Riley cares anymore, though, since she’s not celebrating her birthday the following day due to something that happened to her when she was younger. But what happened? That evening, Amy, Ben, and Danny, the latter in a cast to hide the tattoo on his wrist, watch a tape of Riley’s 16th birthday party, where Bonnie is wearing zebra print and has ferociously teased hair, Danny has a makeshift mustache and a mullet to go along with his letterman’s jacket, and Ben’s braces still hadn’t come off. He also was a bit of a prankster and after trying to put a mean sign on Riley’s back when he gave her a birthday hug, his other plan came to fruition – he rigged the cake to explode when someone cut into it, getting it all over Riley and causing their friends to laugh at her. Ben scampers out of the room, a furious Danny hot on his heels, and Riley begins to cry and asks for the camera to be turned off.

Luckily, Ben does feel bad for what he did, even though he didn’t remember it even happening. Once he leaves, Amy asks Danny whether Riley still loves Ben, which he says that she may, and mentions how obvious it is that Ben has feelings for her. When he indicates that he knew the two had feelings for one another, she questions his motivation in not informing one (or both) sides of the mutual attraction, implying that he might still be in love with Riley himself. To help Riley get the birthday she deserves and to make sure that Amy knows how committed he is to their relationship, he informs a giddy Ben that Riley has had a thing for them ever since they were kids and that the only reason he never said anything was due to a threat against his life and a double pinkie swear. Ben then decides to throw Riley the best birthday party ever to make up for ruining her attitude toward the day when they were younger, which should also help him win her over now.

Tucker has now found Angela through Ben’s phone and called her to meet at the bar under the guise of being a movie producer interested in hiring her for a role. Being that the only glimpse he got of her was in a crowded room, and that he’s the only one of the group who had even seen that much of her, he decides to put on a fake mustache and glasses for the encounter, telling a turned on Bonnie that she would be playing his assistant. Angela arrives and despite the suspicious name (Tyrell Spielberg), she begins signing the papers she’s told is a non-disclosure agreement. Then, Tucker’s obviously fake mustache falls off and lands on the papers, which she notices mention the termination of parental rights. After hearing what happened, she says that if Ben isn’t responsible enough to file that type of paperwork himself, maybe he shouldn’t have sole custody of Emma.

Upset at being dragged into this mess, Tucker tries to distance himself from Bonnie, claiming to be done with the “we” that she used to get him involved. However, while she’s arguing that the two are equally to blame for what happened, Angela comes back and the two begin apologizing for luring her there under false pretenses and failing to file the paperwork in the allotted amount of time. Angela admits that she knows they had good intentions and that all she wanted for her daughter was a happy home and a family who cares about her, which she apparently has in Bonnie, Tucker, Ben, and Danny. She goes on to say that there’s one condition for her signing the papers and disappearing: a look at a picture of Emma. Bonnie finds one on her phone of Ben and Emma together and Angela marvels at how big (and beautiful) Emma’s gotten.

Ben takes a blindfolded Riley to the Bleeker Street Subway Station and leads her, along with armfuls of stuff, to the subway, where she sits down. He accidentally drops everything in his hands while trying to get her situated and when a man beside them offers to help, he grabs their stuff and runs back into the station. Ben hurries to catch him and does, once the man runs into someone; however, by the time he gets back to the subway, it already left with Riley still being blindfolded and not knowing that Ben wasn’t there. He arrives at the surprise party that he planned to throw Riley and tells their friends that she’s missing, lacking any sort of means to communicate with them. Danny takes him out in the hallway and yells at him for hurting Riley, saying that he knew this would happen and his brother doesn’t deserve her. Amy overhears and tells Danny that she can’t do this anymore and leaves to get her purse.

Riley shows up and berates Ben for leaving her alone, where she ended up riding to The Bronx and had to beg for money from people who were begging for money. However, Ben lets her know that this party was for her and that he had an entire “perfect” day planned for her – a carriage through Central Park, a relaxing rowboat ride, a surprise party. But it’s not done, as he kisses her and she kisses back. Just then, though, Angela comes into the party and mentions that once she saw the picture of Emma, she knew she couldn’t walk away and that she wants her daughter back.

Additional thoughts and observations:
-“Did you mug a clown?”
-Tucker’s quick impression of Ben was really good, no?
-This felt like the episode of Friends when Rachel finds out that Ross was going to fill in for her missing prom date before the guy ended up showing up, with the flashbacks and the episode ending kiss. Is Ben Riley’s lobster? Stay tuned.
-So, if Angela hadn’t seen any of the roommates before and Tucker only barely got a glimpse of her, likely while intoxicated, why the need for a mustache, glasses, and (awesomely bad) fake name?
-Danny’s mullet, everybody. Also, I totally buy that Ben was That Guy (we all know him) in high school.
-How long do you think Angela will be involved in the third season? I don’t know if this show could sustain a season-long arc or anything, so I’m thinking they’ll either space it out and have a few episodes dedicated to the custody case, with Ben winning out in the third season finale, or have everything happen in the first half (or so) of the season and then be done with it. It’s pretty obvious that she’ll come in between Riley and Ben, though, right? Expect talk of her and Ben forming the “perfect family” for Emma’s sake and Ben waffling on his feelings for Riley quite a bit.
-It’d be nice if the show spent some time next season filling in who Angela is, why she left Emma, and why she still doesn’t want to be involved in her life, even on a limited basis.
-So, what did you think about the second season of Baby Daddy? Any hopes/expectations for the third season? Will Ben and Riley be able to withstand the stress of the custody case and the reappearance of Angela?