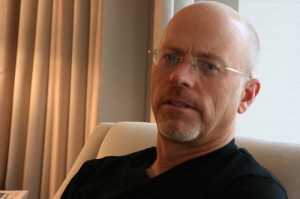 Starz has announced that John Dahl will direct the first two episodes of upcoming series Outlander, based on the series of novels by Diana Gabaldon. The series, which will see Ronald D. Moore (Battlestar Galactica) acting as showrunner, is set to star the likes of Sam Heughan (A Very British Sex Scandal) and Tobias Menzies (Rome) and will be one of several new series the network debuts next year. David S. Goyer’s period-adventure drama Da Vinci’s Demons is the only tenured drama on the network following the cancellation of Boss and Magic City; however, pirate drama Black Sails, set to premiere in January, has already been renewed for a second season.

Set in the year 1743, Outlander tells the story of married World War II nurse Claire Randall, who gets transported back to the 18th century where she is forced to marry chivalrous young warrior Jamie Fraser (Heughan). Said to combine romance, science fiction, history, and adventure into one story, the series will find Claire trying to find a way to go back home and reunite with her husband (Menzies) – if she even wants to, after falling for Jamie and her new world.

Perhaps best known for his work on features Rounders and Unforgettable, Dahl has directed episodes of Breaking Bad, Hannibal, Person of Interest, Battlestar Galactica, and Justified in recent years, with his most recent credit being an episode of Dexter.

Outlander is set to premiere sometime in 2014 on Starz. Production on the 16-episode first season will begin this fall in Scotland, with the next novel in the seven-book series set to be released in the spring of 2014.

Will you be watching Outlander? Do you think that John Dahl is the man to make the novels come to life? How much would you like the series to differ from the novels and how true should it stay?