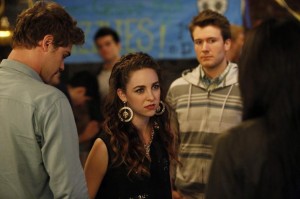 Seeing as Lacey’s main objective throughout this season of Twisted has been to keep her popularity, it was surprising to see her not get ahead of the tape of her and Danny being passed around the Green Grove student body. Yes, she did end up threatening Doug to shut it down, but by that point, he already tasted what the status that had eluded him all through high school felt like and wasn’t about to give that up, especially not with girlfriend Eloise running the show. As a result of her delayed reaction, everyone has seen the video and years of work to build a reputation following Danny killing Tara might have just went down the drain.

On the summer finale of Twisted, Lacey has been put in the position that she’s been (at least indirectly) responsible for putting her peers: outsider. The former popular girl is now being frozen out by her friends and left off of party invite lists due to what she did with Danny; most worthy of concern, though, is the fact that she has no one at school, not with Jo already ditching to avoid the firestorm from the video and her comments at the school board meeting. Lacey expended so much effort to separate herself from Danny, Jo, and the incident that defined her childhood, to the point where it took her a long time to even come to his side and let herself believe his innocence in Regina’s murder, but now, the only way for her to survive this lonely time in her life might be to lean on him and convince Jo to forgive her.

Elsewhere on Twisted, a confrontation between Danny and Archie at a soccer team party reveals something wicked lurking among the popular kids, while Tyler continues to pursue Jo, Phoebe might hold the key to figuring out Regina’s past, and Marilyn uncovers evidence that refutes Karen’s confession.

Will Lacey choose to exonerate Danny or attempt to win her way back into the in-crowd? Who do you think Tess is calling in the finale preview? What would Phoebe know about Regina that could help the investigation?