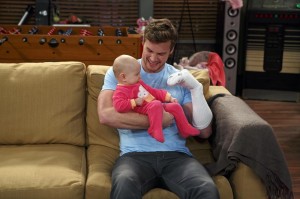 Ever since Emma came into Ben’s life, he’s raised her with the help of Tucker and Danny. The trio might not be the most conventional of arrangements for a baby to be brought up in, but they’ve managed to make it work. However, as the baby gets older, important decisions will have to be made about how much each of Ben’s friends will be involved in her life and if he’s ready and willing to pick up any slack. Coming up on Baby Daddy, Emma’s baptism raises a question that Ben hasn’t yet thought about and might drive him crazy trying to weigh the pros and cons: just who is going to be her godfather?

Wednesday, August 7th – “Whatever Lola Wants”
Ben offers to dog-sit for his girlfriend Megan (guest star Grace Phipps) but the dog doesn’t seem to like him much. Tucker has had it with his roommates’ messy habits so Danny hires two cute girls to clean the apartment. While the boys are away, the girls rob them, and dognap Lola. Meanwhile, Bonnie convinces Riley to get a home spray tan before her interview to get her job back and ends up botching the tan. In order to prove to her old boss (guest star Kym Whitley) that she’s not “too nice” to work for the firm, Riley sues Bonnie.

Wednesday, August 14th – “The Christening”
Ben convinces Bonnie and Ray to invite conservative Aunt Betty (guest star Mary Pat Gleason) to Emma’s baptism in the hopes she’ll write a nice, fat check for Emma. The Wheelers nearly pull off their ruse as a perfectly normal family, until Ray’s boyfriend Steve (guest star Robert Gant) shows up demanding answers. Meanwhile, Ben enlists Riley to choose Emma’s godfather, and she can’t decide if Danny and Tucker are really up to the task.

Wednesday, August 21st – “All Riled Up”
Tucker and Danny bail on movie night and Riley and Ben are left alone for the night. Based on her body language, Ben ends up thinking Riley is into him. Riley, thinking it’s never going to happen with Ben, asks him to help her find the perfect man. Ben devises a plan to set Riley up on a disastrous date where he’ll pick up the pieces, but it threatens to backfire. Meanwhile, Bonnie and Tucker enter a contest to become the new NY Rangers mascot and perfect a routine as the “Rangeroos,” in full kangaroo costumes.

Who do you think should be Emma’s godfather? How will Riley’s date with the guy Ben picked go? Can the boys figure out how to handle Lola before Megan comes home?