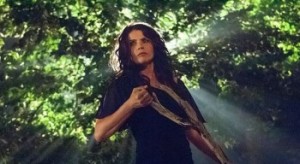 Lifetime has announced that Witches of East End, its second original scripted premiere following Devious Maids, is set to debut Sunday, October 6th at 10:00. Based on Melissa de la Cruz’s New York Times best-selling novel of the same name, the series follows the Beauchamp family, a mysterious clan hailing from New Haven whose matriarch Joanna (Julia Ormond) is harboring a secret about her offspring: they’re witches. But when she’s confronted by an ominous warning, she’s forced to tell her daughters just exactly who they are in order for them to defend themselves from an impending threat.

Though it has a known title behind it and the momentum that genre television currently has, Witches of East End might be facing an uphill battle in terms of catching on. It will likely be airing by itself during the busiest part of the television year on what could be a hellacious night for any new program; not only will the show have to do battle with the likes of Betrayal, Masters of Sex, and Eastbound & Down in its timeslot, it has to contend with delayed/same-night DVR viewing for the likes of Homeland, Boardwalk Empire, The Walking Dead, Revenge, and Once Upon a Time, meaning that a renewal might come down to repeat numbers and cumulative weekly audience, an increasing occurrence on cable in recent times.

Will you be watching Witches of East End? Do you think that Lifetime can successfully pull off supernatural programming? Can the show cut through what is sure to be an insanely cluttered night of programming this fall and make it to a second season?