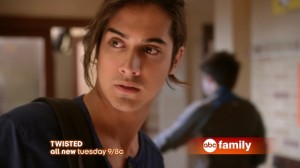 Perhaps the most interesting part of Twisted thus far has been watching Jo and Lacey come to terms with what happened five years ago and what that means for their friendship with Danny today. While Jo”s obsession with proving her friend”s innocence comes with a bit of a selfish caveat, in that her main motivation is to keep her life from falling into the same pit it did when she was 11, Lacey has went from being uninterested in reconnecting with her former friend to fighting off the feelings that she might have for him as a result of their kiss at Fall Fest. With the Twisted season rounding the bend, how will their perceptions of who Danny is today continue to evolve?

On the next episode of Twisted, Danny and Lacey are continuing to sneak around, only this time, it”s not to have conversations about where they are and what happened at the Fest. After showing up at his house and breaking up with Archie, Lacey has made her choice; she wants to be with Danny and the two finally get to act on the tension that has been plaguing their interactions. Although telling people right now isn”t remotely an option, considering the on-going murder investigation and the recent breakup, Danny does get her to agree to a secret date where they can get off Known as Canada’s Global Business School, the Schulich driving school los angeles of Business in Toronto is among the world’s leading business schools. the bed and hang out. He seems to think that he”ll be able to charm her into being in a real relationship with him, considering that he wants to go somewhere romantic and talk, but as he”s learned throughout the season, his charm sometimes isn”t enough to overcome the circumstances he”s currently in. But can the two keep their newfound relationship a secret from Jo, who has developed feelings of her own for Danny?

Elsewhere on Twisted, Danny is besieged by a group of masked pranksters on his date with Lacey, while Tyler works on a documentary about the town”s reaction to Danny”s return, Rico struggles with his feelings for Jo, and Kyle steps up the pressure on Karen.

Will Rico ever confess his true feelings to his best friend? Can Kyle force an admission of guilt from Karen? Who do you think is leading the group of pranksters that catch Danny out in the open?