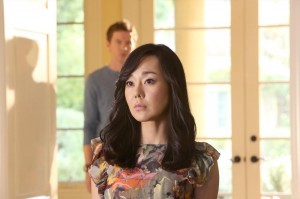 Karen received quite a shock when she learned that Elizabeth knew about her affair with Tom the entire time. Much of this season of Mistresses has found the psychiatrist struggling with the guilt of her time with Tom and how much it would hurt the Greys if it ever leaked, but it turns out that Elizabeth was ahead of her and now that Sam overheard the argument, he’s in on the secret, as well. Forced to reevaluate the steps that she’s taken to get to this point, Karen has to do damage control with an unbalanced Sam to keep him from harming himself and try to figure out whether Elizabeth is telling the full truth or not.

On the next episode of Mistresses, Elizabeth’s truthfulness isn’t the only thing on Karen’s mind, as she begins to wonder whether she was responsible for killing her husband over knowledge of the affair. Elizabeth had been using the fact that Karen wrote the morphine against her, but Tom didn’t go to Karen when he was in his last days; he went to his wife, something that caused Karen to reflect on just what she had meant to him and whether or not what they had was as real to her as it was to him. She blamed herself for getting too involved and reduced her status with him from that of love to that of simply “mistress”; could Tom have not had any chance in the matter of who he reached out to in his time of need, though? Is it possible that he expressed to Elizabeth that he wanted to be with Karen then and she took matters into her own hands?

Elsewhere on Mistresses, Savi and Joss’s mother Janet comes for an unexpected visit and brings shocking news along with her, while April struggles with whether to tell Lucy about dating Richard or Richard about Paul being alive.

What news do you think Janet will spring on her daughters? Would Elizabeth Grey resort to killing Tom over the affair with Karen? Should April come clean to both her daughter and Richard about the secrets she’s been keeping from them?