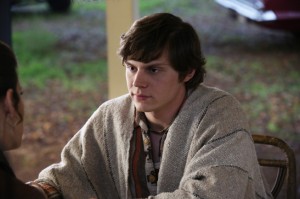 FX has announced that they’ll be running marathons of Emmy-nominated American Horror Story: Asylum and Louie in celebration of their recognition from the National Television Academy of Arts and Sciences. On Friday, August 23rd, the first seven episodes of Asylum will air beginning at 10:00 p.m. and ending at 5:00 a.m.; the remaining episodes of the miniseries, which reaped 17 Emmy nominations earlier this month, will then be broadcast the following day starting at 11:00. Meanwhile, the entire third season of Louie, nominated for Outstanding Comedy Series for the first time this year, is set to air Saturday, August 17th beginning at 10:30 p.m.

While American Horror Story and Louie weren’t the only FX series to make it into the Emmy pool, they were far and away the most successful in securing nominations, as The Americans and It’s Always Sunny in Philadelphia, the only other FX series nominated, combined for three nods. Last year, both series managed to pull off victories for the network, with the former earning two wins (one for Jessica Lange) and the latter being recognized for Outstanding Writing in a Comedy Series. Their chances this year, though, are tough; on the miniseries/movie side, Horror Story has to deal with the likes of Behind the Candelabra and Top of the Lake, while Louie will face off with the final season of 30 Rock and a still strong Modern Family. Will either be able to increase their win total from a year ago? Or would they be doing well to hold steady in terms of total wins?

The third season of American Horror Story, subtitled “Coven,” is set to premiere later this fall, while the fourth season of Louie is on hold until May 2014.