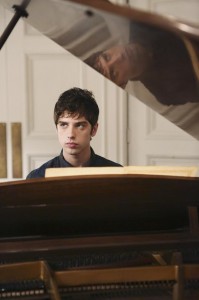 With what happened to Stef at the end of the most recent episode of The Fosters, the family is at a loss in terms of how to act, what to feel, or where to place the blame. Obviously, if she’s been seriously hurt, Ana’s boyfriend Evan would be where to place most of their negative feelings, but there are some in the Foster family who don’t want to leave it at that. While Evan may have landed Stef in the hospital that night, she didn’t go over there looking for him; she went there to try and find Jesus before anything could happen to him. Just how much blame do he and Mariana, who drew her brother in with her secrecy, deserve for what happened? And which member of the Foster family is quick to point the finger at the twins?

On the next episode of The Fosters, Brandon blames Jesus and Mariana for what happened to his mother, but before he can go much further or say something that he would regret, Callie tries to talk to him when they’re alone. She explains the mindset that the two likely had and why they kept their interaction with Ana such a secret; like her, they’ve likely been wondering why the people who were supposed to love them more than anyone else simply didn’t. That drive to understand why they had been left by Ana and trying to sort through conflicting feelings regarding how they would interact with her now – it’s complicated and drove them to make decisions based on years of no contact with their birth mother and a natural compassion they had for her. But could it cost them their foster mother as a result?

Elsewhere on The Fosters, Lena learns just how many secrets her children have been keeping, while everyone waits for news about Stef and Jesus and Wyatt calls Callie on her obvious bond with Brandon.

Will Callie’s conversation with Brandon help him understand the mindset of a foster child? Does he have the right to be mad at Jesus and Mariana for what happened to Stef? How will Lena react to getting the full picture on what’s been going on with the kids recently?