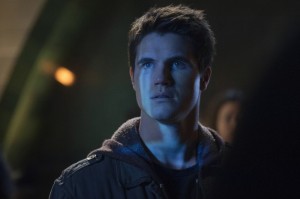 The CW has announced that they will be using two Fridays in October to encore their fall series premieres. On Friday, October 11th, the pilot of The Tomorrow People, starring Robbie Amell as a young man who discovers he has powers as the result of human evolution, will be airing at 8:00, while period drama Reign will follow at 9:00; The Tomorrow People is set to bow Wednesday, October 9th, with Reign debuting Thursday, October 10th after the fifth season of The Vampire Diaries.

Elsewhere, the series premiere of Vampire Diaries spin-off The Originals will re-air on Friday, October 18th at 8:00 and lead into America’s Next Top Model, returning to the fall schedule where it aired last season. The following Friday sees the second season premiere of surprise renewal The Carrie Diaries, which has shifted from the Monday slot it aired this past season. Last season, The CW replayed each of its five pilots, both midseason and fall, although only two managed to survive to this season. There’s a chance that the extra sets of eyes could expose one of the shows to an audience that either might not have had the chance to watch it or wouldn’t have otherwise thought to, so it’s an experiment worth trying. Which show, though, would be the most likely to benefit from the additional exposure?

You can check out The CW’s fall 2013 schedule here, as well as their fall premiere dates here and trailers for their new series here, here, and here.

Do you think this strategy will work out for The CW? Which new CW series will you be watching this season? Is there a potential breakout series in the network’s 2013-2014 class of new shows?