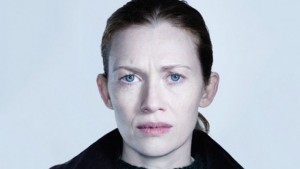 Sarah Linden thought that she had put her detective career in the rear view mirror. After years of investing her mind, body, and spirit into each case, to the detriment of her relationships with friends and family, she finally had enough and quit Seattle PD following the closing of Rosie Larsen investigation. Now would be the time for her to repair the damage that her career had done to her physically and emotionally, as she had to shrug off the demons that clung to her and devote time not only to her son but to herself. However, on the season premiere of The Killing, Linden gets a double dose of nostalgia that will threaten the newfound stability she’s found in her life.

18 months after their goodbye, Holder has found her again and wants to ask questions regarding a case Linden thought she closed. Details of Holder’s case (working girl with a nearly severed head) match up with Linden’s former investigation and he thinks that they can pool their resources; however, Linden’s not necessarily convinced that there is a connection, as it would mean that she put away the wrong man. Whatever doubts she may have about Holder and the validity of the similarities between the two cases are turned upside down once she returns to her victim’s home and sees that her son has been drawing again. The same drawing of barren trees and a coffin that she had last season. Is Linden going to have to come to terms with the fact that her time as a detective hasn’t quite ended yet?

The two-hour third season premiere of The Killing airs tonight at 8:00 on AMC. You can check out additional sneak peeks here.

Are you looking forward to seeing Linden join Holder’s murder investigation? Is her participation here going to exorcise the demons she’s been carrying around from her past case? Do you think that the man they’ve pinned the killing on actually did it?