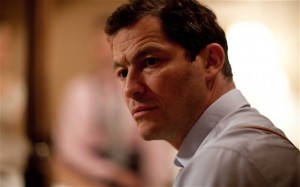 After tackling serial killers, dysfunctional families, and terrorism, Showtime has turned its attention to infidelity, as Dominic West has become the first actor to agree to  star in the networke’s drama pilot The Affair. He’s set to portray the male lead, a married high school teacher named Noah who meets a woman who makes him question his marriage.

From playwright and writer/producer Sarah Treem (In Treatment) and co-creator Hagai Levi (In Treatment), The Affair tells the story of two marriages that are shaken to the core by an affair. The show will have a different story structure, in that it’s told separately from the male and female perspective.

The Affair is one of two drama pilots in contention at the network, as political-religious thriller The Vatican, starring the likes of Kyle Chandler and Anna Friel, has already began production. The impending exit of Dexter will leave at least one slot open on the schedule for next year and with rumors that The Borgias might not live to see a fourth season, there’s a chance that both series see the light of day. Depending on who joins West in the cast of The Affair, though, it might be in second position to The Vatican, seeing as how the latter has star power, a flashier concept, and a show that it would make sense to replace. The Affair‘s unusual structure, while likely dramatically interesting, and (seemingly) lower stakes might end up holding it back from earning a spot on the schedule.

Most known for playing Detective Jimmy McNulty on HBO’s The Wire and Hector Madden on BBC’s The Hour, Golden Globe nominee West has appeared in the likes of John Carter, 300, and Punisher: War Zone.