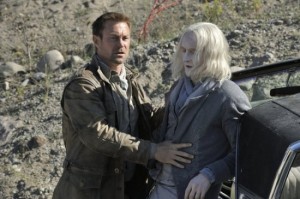 As there’s no new episode on May 27th due to Memorial Day weekend, Syfy will be airing a Defiance catch-up marathon on Saturday, May 25th, beginning at 4:00 p.m. The series, taking place on a terraformed Earth in a boomtown named Defiance (located where St. Louis currently stands), has been a big hit for the network, debuting as Syfy’s most watched scripted series premiere in nearly a decade. Among those featured are Grant Bowler, Julie Benz, Mia Kirshner, Jaime Murray, and Tony Curran.

Listed below are the dates, times, titles, and descriptions for each of the first six episodes of Defiance, which will be played from the beginning again at 11:00 p.m. the same night.

Saturday, May 25th, 4:00 p.m. – “Pilot”
The arrival of the mysterious Nolan and his charge Irisa to the town of Defiance marks a threat to the fragile peace that exists between the residents in the premiere of this futuristic drama, which is set in the year 2046, more than 30 years following a war between humans and aliens that left Earth forever changed.

Saturday, May 25th, 6:00 p.m. – “Down in the Ground Where the Dead Men Go”
A killer is pursued; at the same time, Nolan and Datak come to blows over an ancient ritual.

Saturday, May 25th, 7:00 p.m. – “The Devil in the Dark”
Irisa is forced to confront a disturbing power; at the same time, Defiance is invaded by a swarm of menacing Hellbugs.

Saturday, May 25th, 8:00 p.m. – “A Well Respected Man”
Kenya is kidnapped; Rafe moves a step closer to learning the truth about his son’s death.

Saturday, May 25th, 9:00 p.m. – “The Serpent’s Egg”
Nolan and Amanda find themselves in danger as they attempt to transport a prisoner out of town; and Irisa’s mood grows dark after a run-in with the man she believes tortured her as a child.

Saturday, May 25th, 10:00 p.m. – “Brothers in Arms”
An old war buddy catches up with Nolan at the same time a Castithan criminal with a history of violence enters the picture.

Defiance returns with new episodes Monday, June 3rd at 9:00 on Syfy. The show has already been renewed for a second season, which will premiere in 2014.

Have you been watching Defiance this season? If you have, how do you think the first six episodes have been, overall? Will you be sitting through part of the marathon, if not as a first-time viewer than to refresh your memory on certain details?