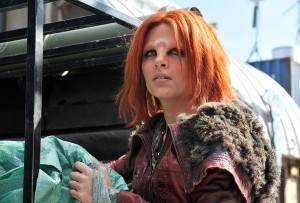 Syfy has officially renewed Defiance for a 13-episode second season, which is scheduled to premiere sometime in 2014. The show will resume production in Toronto this August.

“Bringing the rich world of Defiance to life has been in incredible team effort.  We couldn’t ask for better partners than Kevin Murphy, his amazing cast and crew, and Trion Worlds,” said Mark Stern, President of Original Content for Syfy and Co-Head of Original Content for UCP. “We can’t wait to see where they take us in the second season.”

Taking place on a terra formed Earth decades into the future, Defiance centers on the town of Defiance, which sits atop what was once St. Louis. The boomtown, featuring a cross-section of the seven alien races that invaded Earth all those years ago, is also home to a a human drifter and his adopted daughter, who put down roots and try to build a stable life for themselves. However, things aren’t as stable as they would be in town, with its new Mayor, cultural clashes, and constant violence, so as much as they make like having a new home, it’s going to take some time for them to feel safe. Considering how long they spent in the Badlands, though, the drifter-turned-lawman and his daughter are as well-prepared as they can be for the carnage to come.

The audience for its April 15 premiere was the second largest series premiere in the network’s history among adults 18-49, making it the biggest in nearly nine years in that coveted demographic, based on Live +7 Data. The premiere also delivered almost 4 million viewers (3,834,000) and has quickly become Syfy’s highest-rated original series this year in adults 18-49, adults 25-54 and total viewers.

Have you been watching Defiance? Where would you like the show to go for a second season? Which of the Votan races is your favorite thus far?